Why, oh why do I always forget I’m not a B cup, especially  when the dress I’m making is a low cut wrap front style and will inevitably gape like a hungry dog waiting to be fed a juicy bone.

I present exhibit A, in evidence,  m’lord!

Most of the time I get away with not doing an FBA, but in this instance I should have known better. So, this dress is just about wearable, but only comfortably when I don’t move my arms, or, erm, bend over.

I still like it though, so will be wearing it with a camisole, which does spoil the lovely neckline somewhat. Better, would be to  just sew that cross over bit shut when I get a minute.

Pattern : Lisette B6168 available from Butterick. In dress and also in tunic version.

I cut a size 12 and graded to a 14 at the waist and hips. I did a 1.2cm forward shoulder adjustment and a 2cm swayback adjustment.

The bodice is a tighter fit than I normally get when I sew this size. The sleeves are also quite tight too. I don’t like things too tight, so maybe I’m just being picky.

The fabric is a beautiful quality soft linen from Merchant and Mills. I bought it a couple of years ago when I visited their shop in Rye, whilst on holiday. It’s not really my colour and that’s why I haven’t sewn it up but I needed more conservative clothing for work and it matched the pattern perfectly.

When my arms are by my sides it looks great, despite the wind playing havoc the day I took the photos. I really like the neckline and waist detail. Also, linen, creases, ahem. 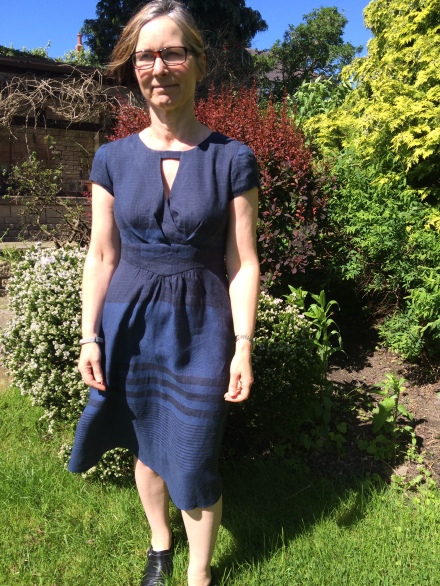 The back fit is pretty spot on too and my stripe matching is acceptable. The fabric is a mix of checks, plain and stripes  so was somewhat tricky to work with. 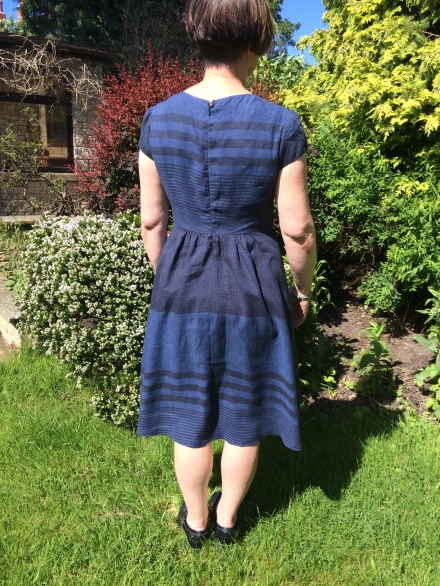 You can see here the tighter fit at sleeve and bust

The  garden is still doing it’s thing at the moment, despite a definite lack of sunshine. Which sort of leads me in to another subject I feel I couldn’t let slide past unnoticed

That is the momentous events happening in the UK right now, which have led to our voting to leave the European Union. These past few weeks have been unprecedented in scope and scale,  and I’ve personally felt pretty upset by all that’s happened. I studied European politics and the EU whilst at University and have worked for large European companies for most of my life, until recently.  That gave me a positive perspective on the benefits of being in the EU, which left me totally unprepared for the result when it came. I don’t think I was the only one.

One major flaw was the structure of the Brexit campaign team. They worked just like a pop-up shop; here one minute, gone the next.  This meant they  could conduct their campaign  knowing full well that they would bear absolutely no responsibility for delivering on their promises, should they win. .  None of them had any mandate, or power to implement the kind of political change they advocated.This led them, I believe, to make the most scandalous of promises about where money would be spent should we vote to go.

Both sides have let themselves down in their campaigning, further discrediting our political system, and politicians.

I find it particularly paradoxical that those who wanted us to de-couple from the rest of Europe are now asking for unity.

I really hope we can find the right way to emerge from this. I do want to do something but I’m not sure what, yet. Our politics are in a mess and we have no real leadership at the moment. It is a time of unprecedented change, and real uncertainty. I am trying to remain positive.